This brand was born in 2017 to bring high-quality nutritional supplements for the vegan population.

However, they are not the typical supplement company. Rather, they advocate for high transparency, sustainable production, and minimalist supplementation.

They call this complementing (instead of supplementing) your diet. For example, their main product is a multivitamin that provides only 8 nutrients that are hard to get on a vegan diet.

One of their founders, Matt Frazier is known for his best-selling book "The Plant-Based Athlete" and for creating scientific content through their allied brand No Meat Athlete.

When Complement came in May 2021 they were making around $1.5M a year. Their goal was to reach $5M/year in revenue, which we helped them surpass in less than a year.

By the end of 2021, their revenue had been $5.2M and raised millions in VC funding after getting included in the Inc 500 list of fastest-growing companies.

This special report covers the 3 most important strategies behind this growth and what results they produced. 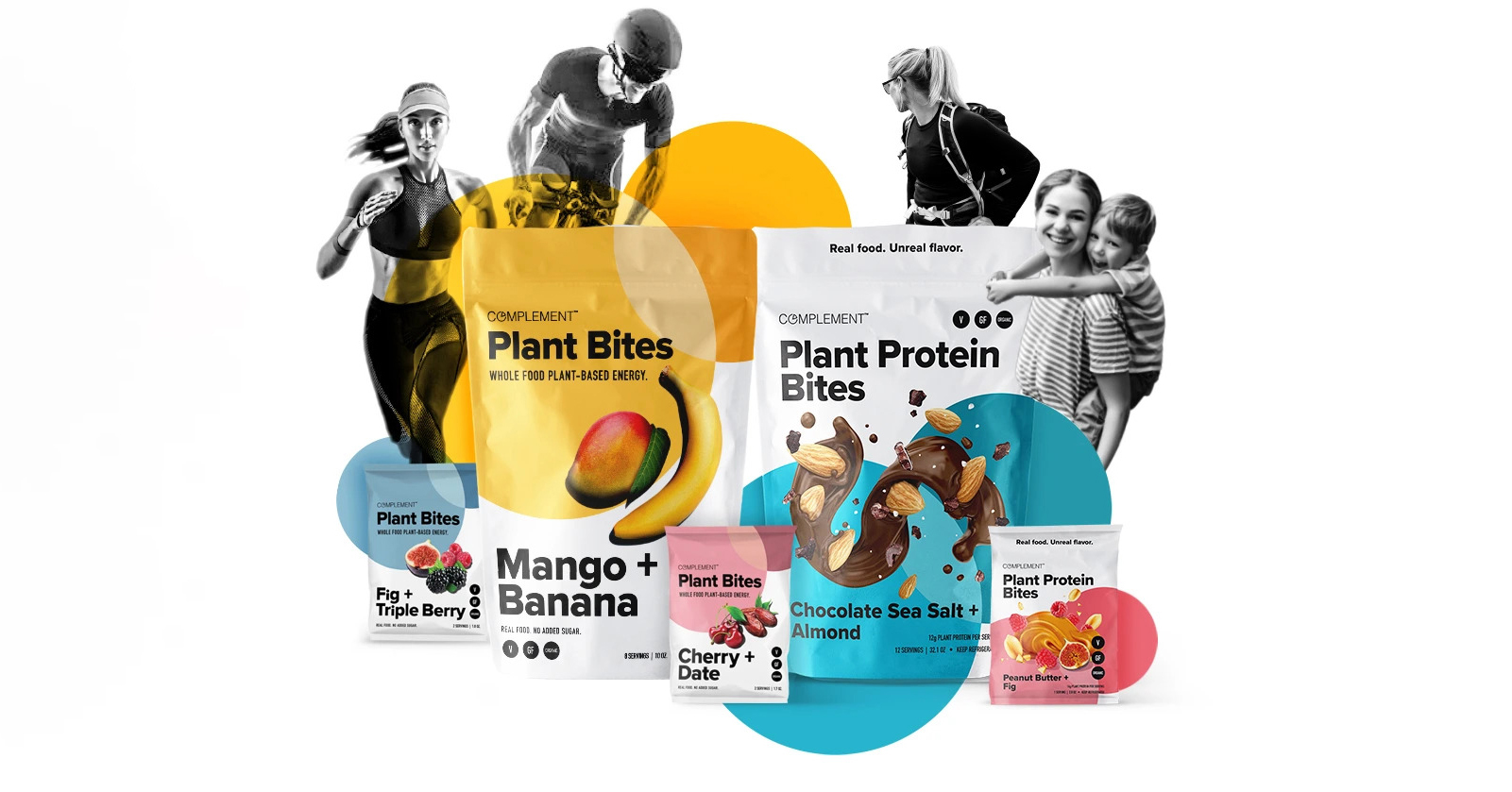 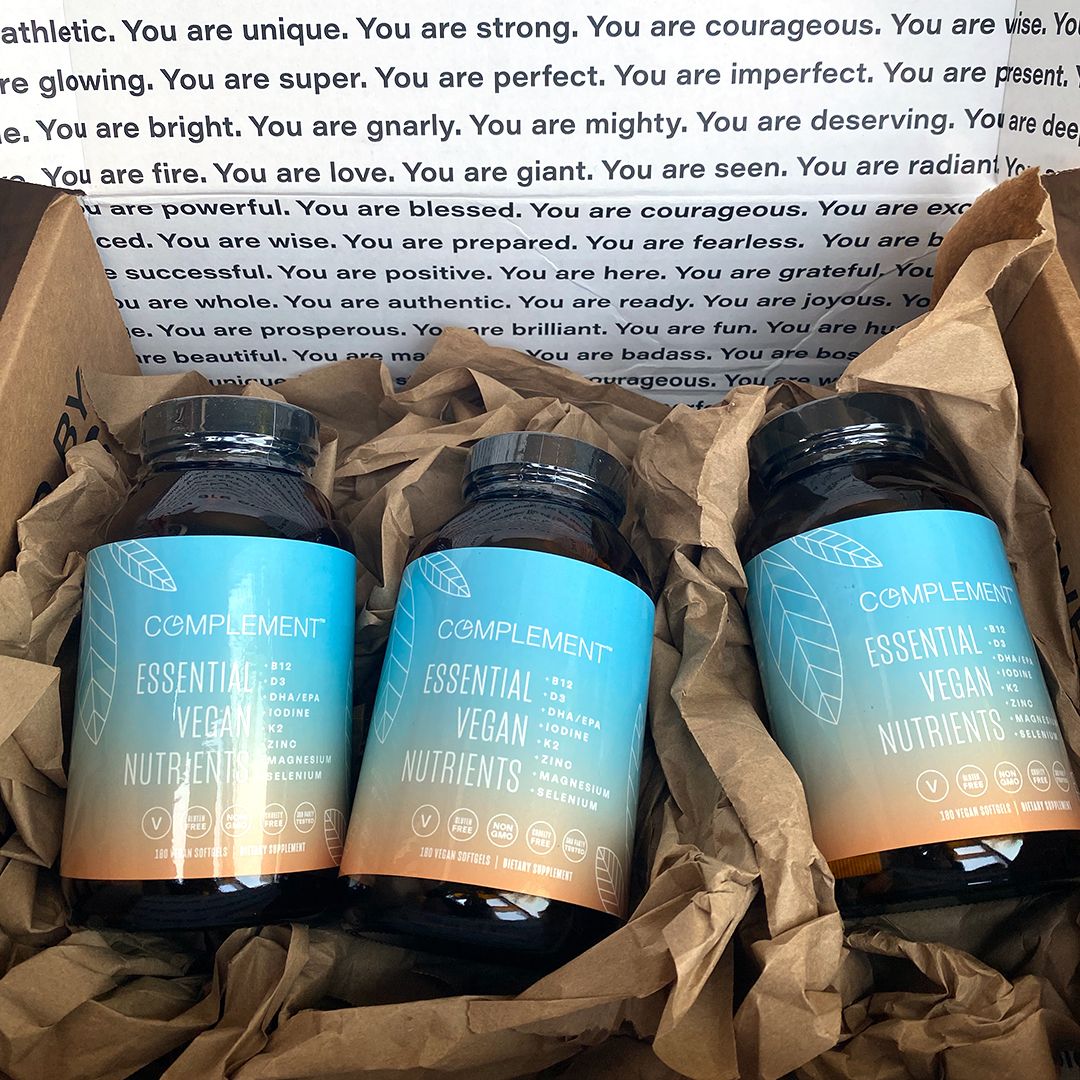 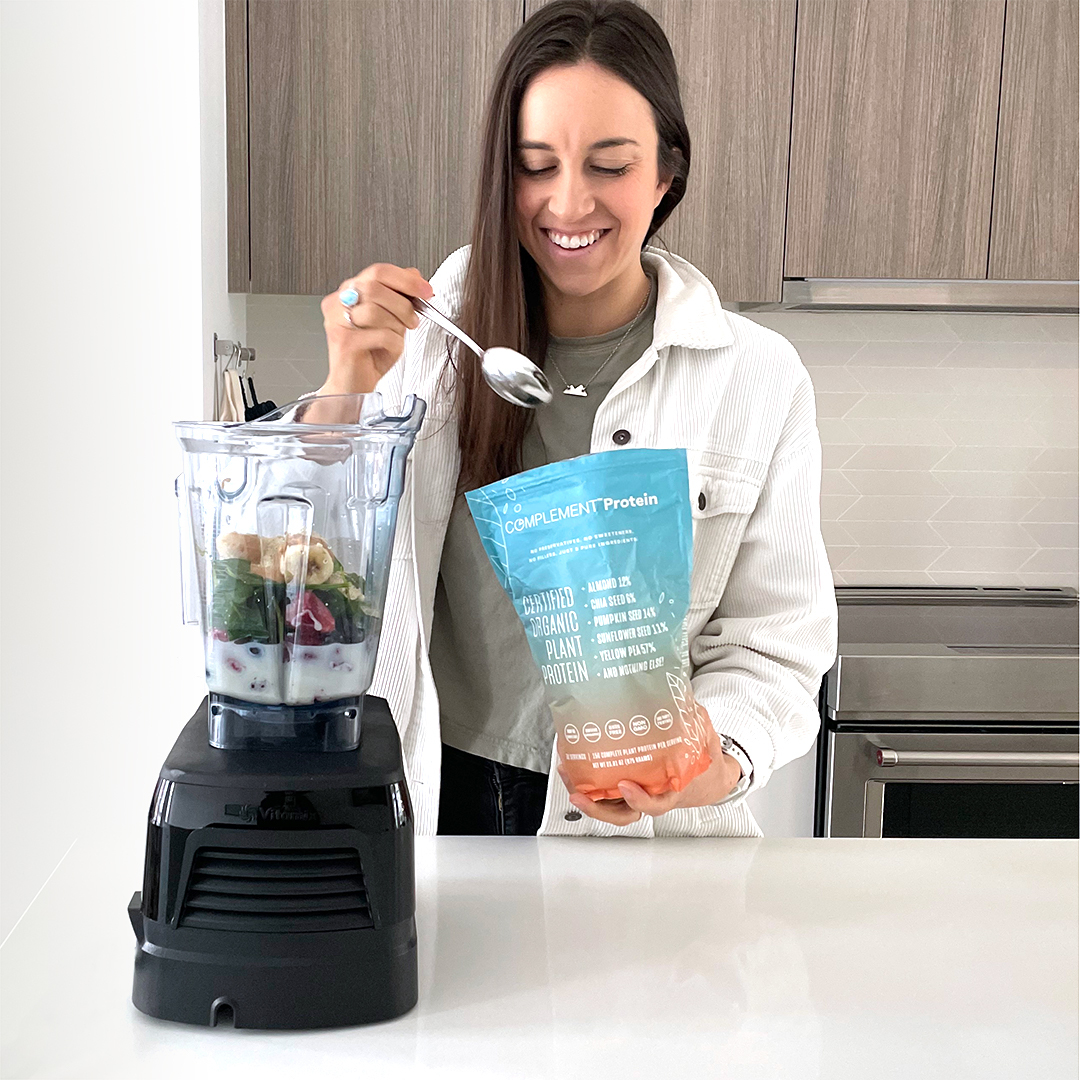 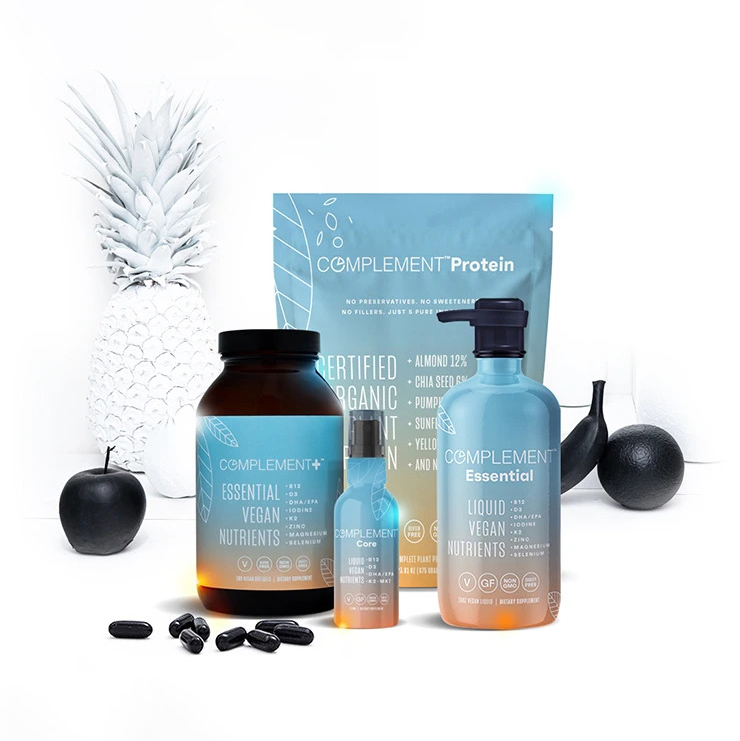 When Complement came to us they had a strong brand presence with No Meat Athlete, solid products and a good website, but their paid advertising was not performing well.

Even spending up to $1,000 a day, the Return On Ad Spend (ROAS) would not improve. Our initial goal was to reach at least 1.3x ROAS to break even, as their subscription-based model could then leverage the lifetime value of each customer.

The supplement niche is very competitive and CPMs were very high ($45 per link click), so the main challenge was improving the creatives. By producing and testing hundreds of videos, titles, ad copies, hooks, and landing pages, we lowered link click prices by half, setting a better base for scale.

Regardless, the biggest problem was their audience/message fit. The initial audience was vegan athletes and young people looking to improve their fitness, but the message was not converting well.

However, with deep customer research we realized their most loyal customer were women in their 40+ who had families and cared a lot more about longevity. That’s why their message shifted from fitness to general health benefits like nail growth, stamina, and prevention, which attract the right audience for their products. 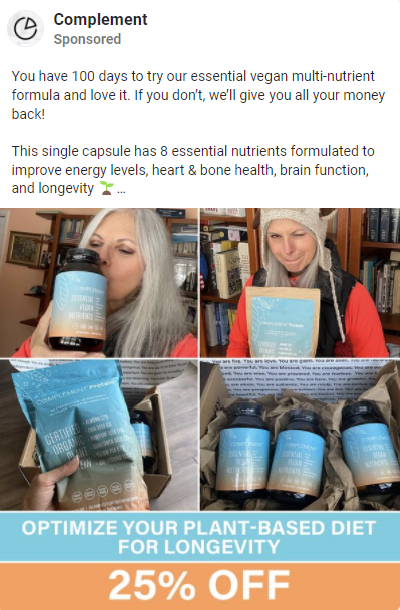 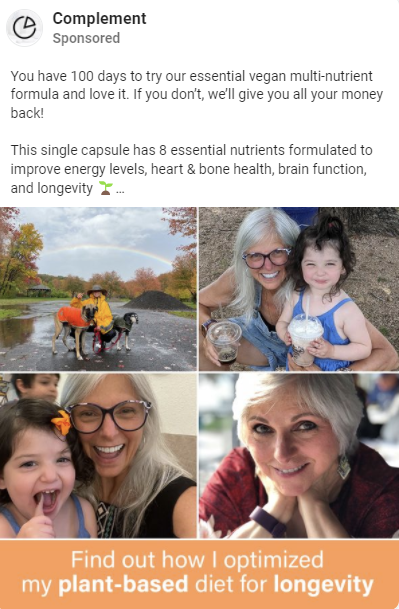 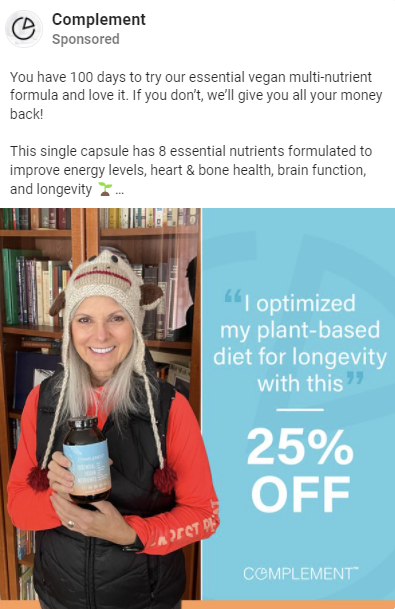 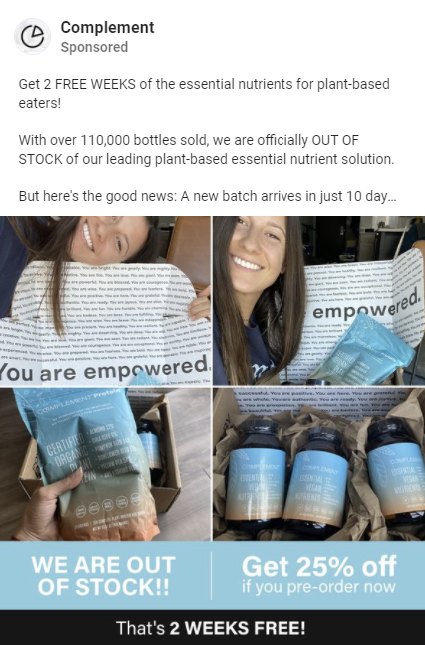 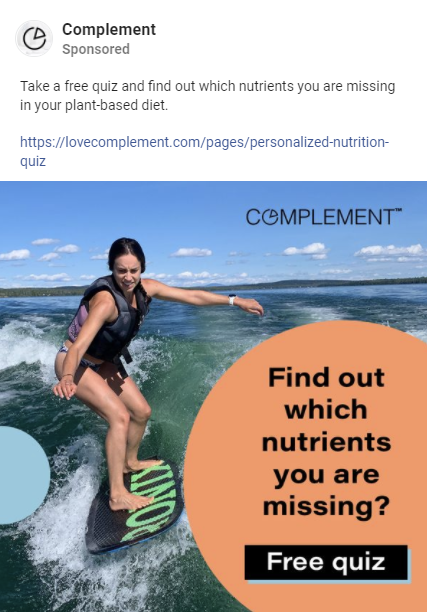 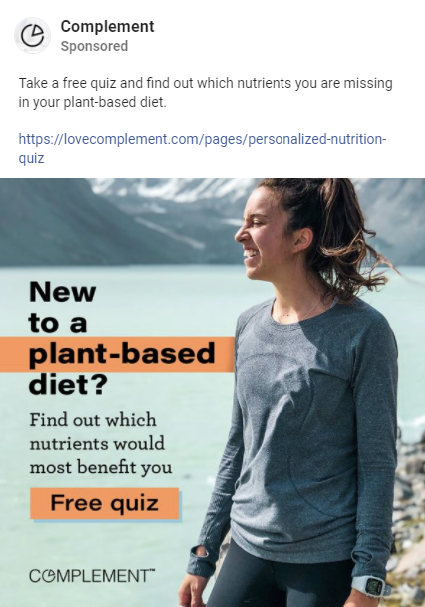 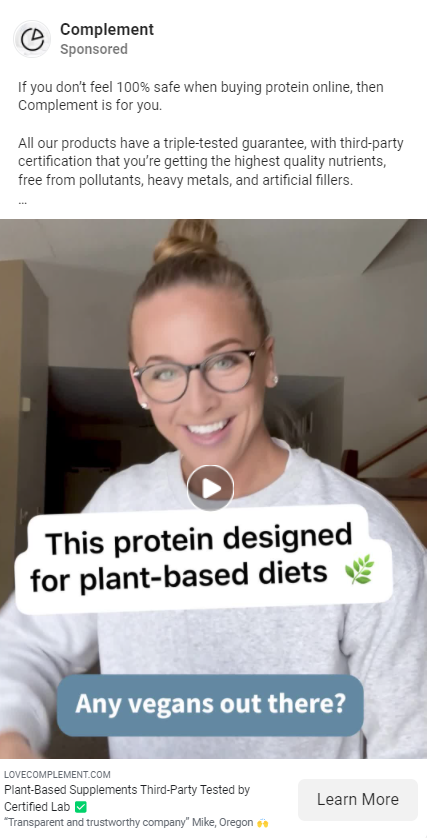 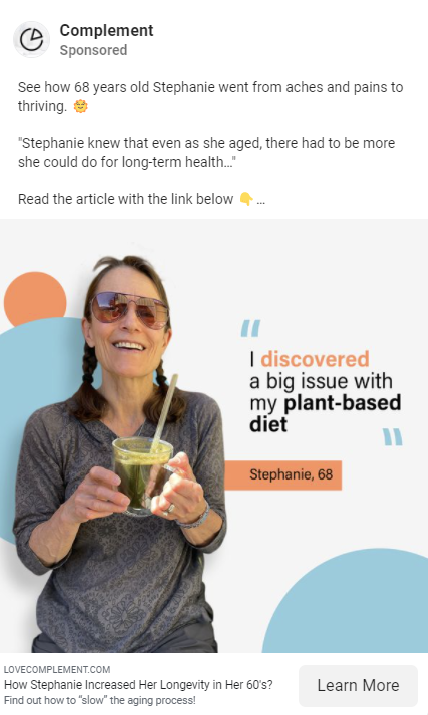 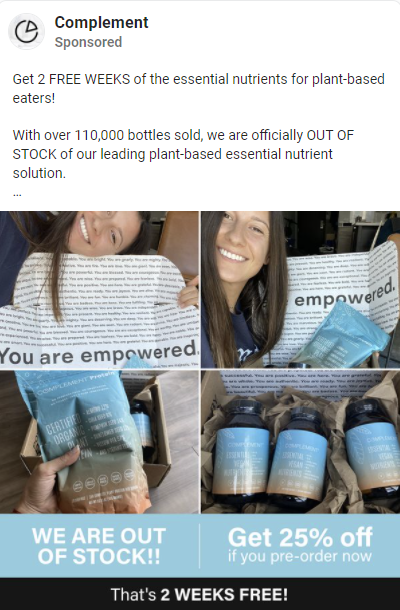 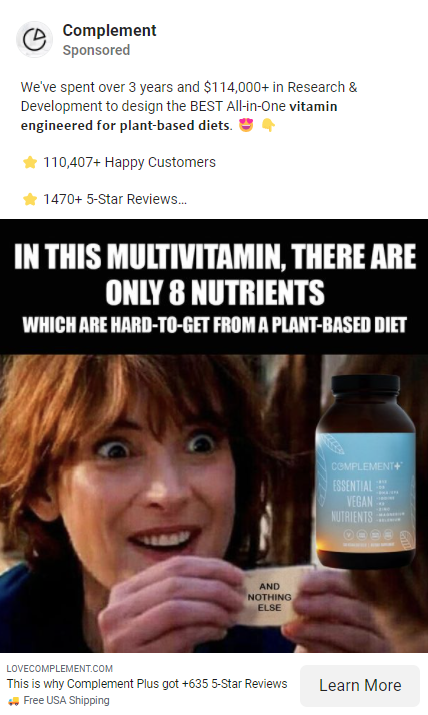 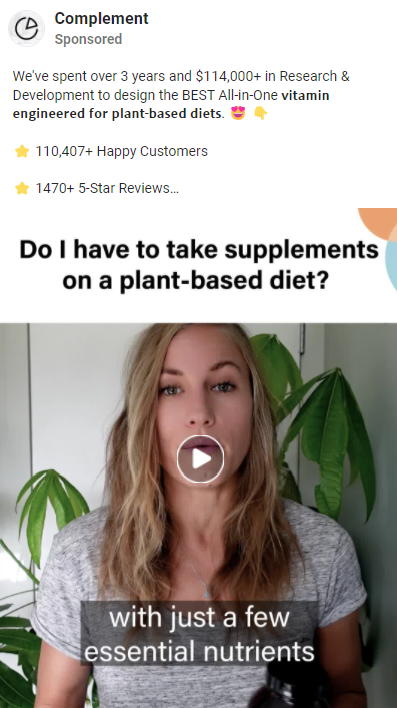 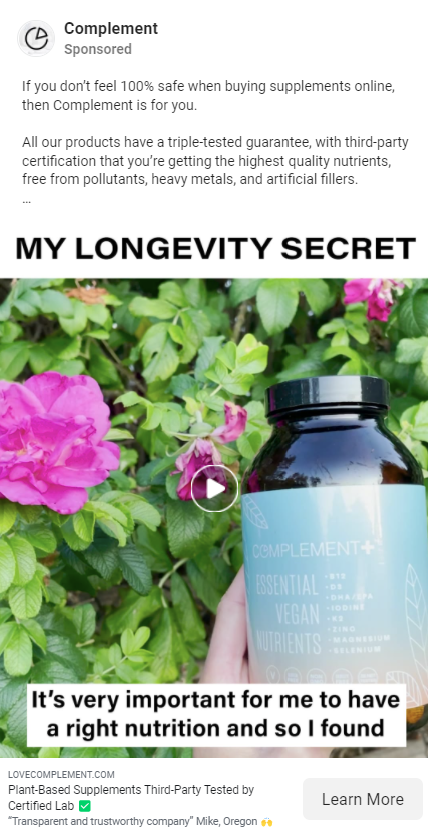 They were 3 strategies that helped us scale Complement.

Complement has a network of affiliate influencers who create content and endorse their products. These people have a community of people who know, like, and trust them, so we tapped into their audiences through dark posting.

The first step was to sign an agreement with the influencer. They would create content and give us access to their ad accounts to launch the campaigns from there. They could introduce a quality product to their audience and make money in turn.

All the creatives we launched from these accounts had to be adapted to their voice and have a native feeling. We ghostwrote the copies while the creator provided the pictures and videos.

Using this approach, we could launch endorsement ads from nutritional coaches, doctors, and fitness influencers who gave us trust when we reached their audience.

After many experiments we landed on 3 changes on their website that produce an 82% lift in conversions.

The first experiment was a benefit description on their product page that hooked visitors with a short paragraph. The hook was designed with the psychology of the user in mind, and increased the conversion rate by 22.5%.

The second experiment was highlighting the product benefits early on the page with the phrase “The ultimate multivitamin for plant-based eaters”. This instantly made the benefits clear and increased the conversions by 7.6%.

Finally, adding animation and glow to the Add to cart button could draw people’s attention to the CTA and increased conversions by 39.3%.

Overall, these changes ensured that more of the paid traffic who landed on their website became customers, which helped us fuel their growth.

We tested a variety of funnels to find a reliable strategy to grow the business. Some examples are:

Overall, the two best-performing funnels were advertorials and lead magnets.

We focused on storytelling frameworks that educated the readers on why they needed a solution in advertorials and then introduced the product.

For lead magnets, the content was mainly scientific and value-driven. We could capture people’s emails and convert them on the back-end with email campaigns and special promotions. 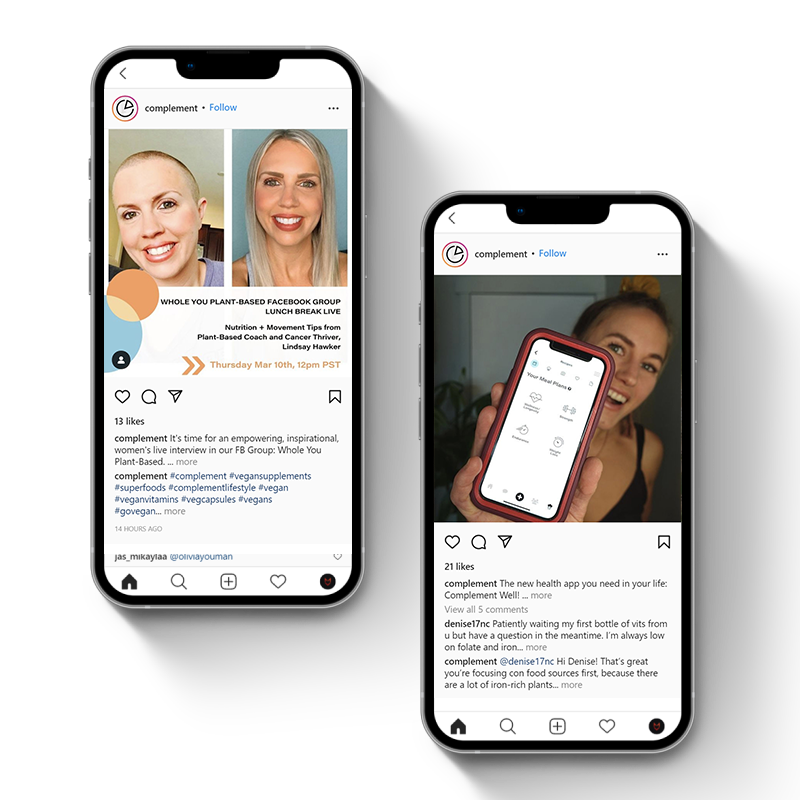 As said before, when Complement came in May 2021 they were making around $1.5M a year. Their goal was to reach $5M/year in revenue, and by the end of the year they had surpassed $5.2M in revenue.

Total ad spend during this period was $385.445 with a 1.6 ROAS. Considering they came in barely breaking even, this was a huge win that made them profitable on the first sale and allowed for pure profit on the back-end with subscriptions and upsells.

The total number of new customers subscribed to Complement was 10,217 in 6 months. All this with iOS14 changes that required us to adapt without third-party software (just using off-line purchase conversions data).

By the end of 2021, the Inc 500 list included them as one of the fastest-growing companies, they raised millions of dollars in VC funding, and kept improving the lives of 110,407+ vegans. 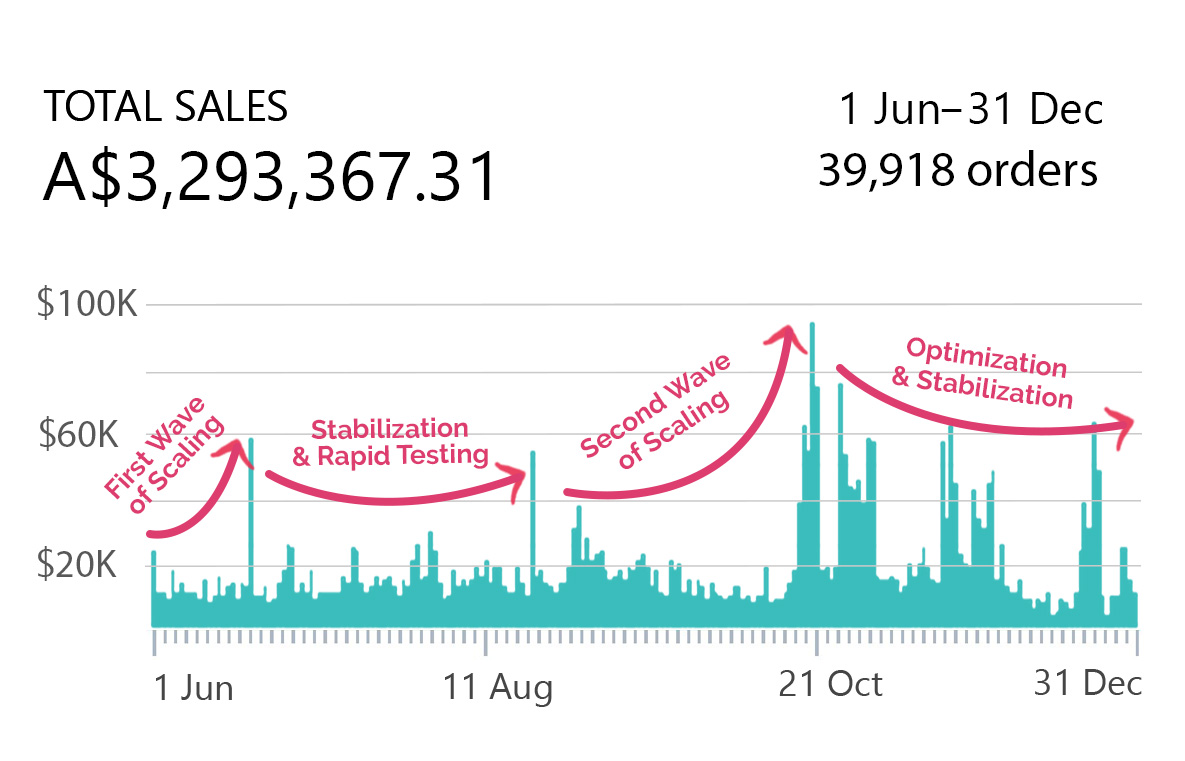 Want To Partner Up With Us To Grow Your eCommerce Business To The Next Level?

Apply to work with us